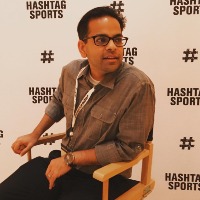 I am a multiple Emmy-winning producer and creative executive who has spent more than a decade at the highest levels of digital, television and social media.

With a Cameron Crowesque start, I covered the NBA for Slam Magazine and appeared on the cover of Sports  Illustrated for Kids with Shaquille O'Neal at the age of 15.

During my time at ESPN, I produced features for SportsCenter and wrote several cover stories for ESPN.com that ranged from the spelling bee, cricket to Slamball.

After stints at Fox Sports and MySpace, I held development roles at ESPN and DLP Entertainment.

Later I led the Digital Features and Sponsored Content editorial team at NFL Media, where I led projects as diverse as "The Oral History of Varsity Blues," NFL Fan Pass, and Rod Tidwell: A Football Life. Following the NFL, I joined the Orlando Magic as its Creative Strategist, where I oversaw social and content strategy for the team.

My dream came true when I got a chance to work with legendary coach Steve Spurrier as the Director of Digital for the Orlando Apollos, the new pro football team in the Alliance of American Football.

My next opportunity took me to the travel and hospitality industry, where I launched and led the in-house agency at Rentyl Resorts and created and executive produced such video series "Sunset 365" and "Inside Margaritaville Resort Orlando" and more which won over 50 industry awards including Telly and Marcom Awards for brands like Margaritaville, Island H2O Live, Sunset Walk, Encore Resort, Bear's Den, Islands of Islamorada and multiple global locations.

To celebrate the 20th Anniversary of Jerry Maguire, I came up with the idea to create a mockumentary on Rod Tidwell, the fictional wide receiver played by Cuba Gooding Jr. We teamed up with Sony Pictures and collaborated with Cameron Crowe to tell the story of what happened to Tidwell after the movie. I produced and co-directed the feature.

The Oral History of "Varsity Blues"

Wrote and produced "Varsity Blues Oral History" longform feature where I interviewed the cast, crew and creators of the film about how it all happened.

I created, wrote and produced NFL animated infographic web series for NFL.com and the NFL's Youtube channel. This specific video remains one of the most popular videos posted with over 2.4 million views.

As Creative Strategist at the Orlando Magic, I created one of the first in-house content agencies for a pro sports team. Stuff Studios was invented to help use our famous mascot STUFF into popular culture by telling scripted, character-driven stories.

Created and produced branded content animation series for Orlando Magic that had over a million social media views. The series was sponsored by Budweiser and featured unique and untold Magic stories with former Magic players and executives.

As the Director of Content for the Orlando Apollos, it was a joy to build the content strategy from a team from scratch. One of the main pillars was creating documentary series for our fan base. This series won an AVA Digital Award for social video.

Studio T Creative is an Emmy, Telly and Webby award-winning creative team that specializes in creating unique storytelling content for brands. It is created by Amar Shah and Tejal Shah

Perspective | To many Indian Americans, Apu is offensive. To me, he's my dad.

A slow-brewing controversy over the longest-running TV show in history came to a head a few weeks ago. In his documentary "The Problem With Apu," Indian American comedian Hari Kondabolu called "The Simpsons" character Apu, voiced by Hank Azaria, a racist stereotype - "a white guy doing an impression of a white guy making fun of my father."

An award-winning ESPN.com cover story I wrote about my journey to India for my wedding, where I fall in love - with a new sport, cricket.

Hanging with Shaq in high school

He smiled and whispered in her ear ... It was April 26, 1996. Game 1 of the first round of the NBA playoffs between the Detroit Pistons and Orlando Magic. I was then a short, skinny 15-year-old who barely knew how to shave. Earlier that day, I heard Mindy, the senior girl who I had crushed on, mention she would be attending the Magic game that night. Prom and graduation were weeks away. I needed to leave a lasting impression. Hence, I pulled out my ace in the hole, all seven feet of him. I...

My addiction to T206 baseball cards

The Monster had taken control. My wife Tejal held a torn manila envelope, displaying the contents before me. Within a welded slab of hard plastic was my T206 Piedmont Rube Waddell baseball card. "You told me you stopped."

Our digital features editor, Amar Shah, has never played fantasy football until this year. He chronicled his adventures this season. It's done. No more games, line-up changes or trash-talking. No more driving my wife crazy or annoying my co-workers. Although, I will continue to annoy Michael Fabiano, as it has become my life's goal to dethrone him in fantasy.

Keepers of the Hive

Indian-Americans are the New England Patriots of spelling bees...With their Harry Potter spectacles, floppy black mops of hair and bookish personas, they look exactly like a younger version of me. The similarities are eerie.